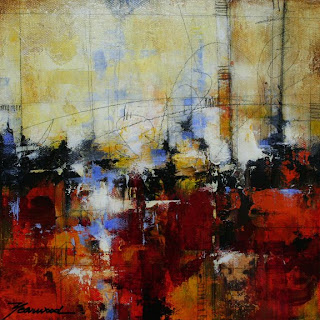 I'm doing a few more of these little 8x8'' palette knife studies that have been so popular in the past. I get into all of the large gallery work and sometimes forget how enjoyable these small works are.
I paint them "on the fly" and quickly, so they take on a personality all their own. This one is called "chimera" which means "dream or fantasy". I can get into a dreamlike state sometimes when delving into my art, so the title is appropriate!
www.markyearwood.com

Posted by Mark Yearwood at 3:39 PM No comments: 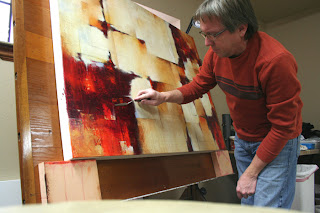 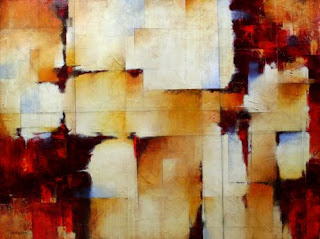 ©2011 Mark Yearwood
"Fortitude" 36''x48''x 2.25''
Acrylic/Graphite on Canvas
I've been pretty busy in the studio and have some new work up on my website, including this new 36x48'' deep canvas. I went back to my loose grid style and really enjoyed where this painting took me in the end with the rich layers and warm tones.
I will post up some other work over the weekend as well.
I'm excited to announce my acceptance to the Oklahoma City Festival of the Arts this next April! I have applied three years to this great annual event and finally made the cut! The downtown festival runs six days each spring and brings in thousands of visitors. If you are in the OKC area, please come out and meet me at this event April 24-29, 2012.
I hope everyone has a great Thanksgiving with family and friends. I know I am very thankful for all I've been blessed with and the ability to create and share my work.
Watch out on "black friday''...or better yet, support your favorite artist!
Buy local. Buy handmade. Buy quality. Buy with love!
www.markyearwood.com
Posted by Mark Yearwood at 6:18 PM No comments: 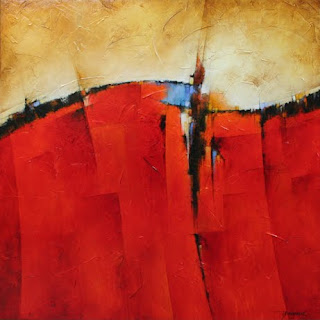 Well, you never know what to expect living in Oklahoma. We are known for tornadoes, but not earthquakes. We've had a few small ones, but this past few days have been crazy with a cluster of shakers in East central OK.

I was in the middle of this painting when we had the largest on record Sunday night measuring 5.6. Although we had only a small rumble here in Western OK, it shook things up pretty good near the center. I felt this piece resembled two plates colliding in the earth and just had to title it this way. It's pretty ironic that the piece fits the story line so well.

Oh, and we had tornadoes this week, as well as another 4.7 quake last night during the tornado storms! Is that a Quakenado?

Posted by Mark Yearwood at 8:02 PM No comments: 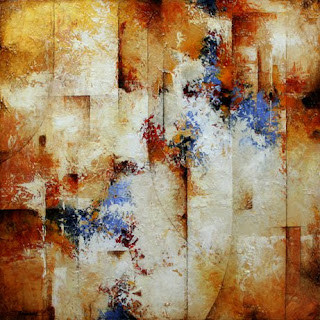 ©2011 Mark Yearwood
"Chronicle" 24''x24''x1.5'' acrylic/canvas
Not every one of my paintings come out just the way I envision them. Once in a while the canvas seems to be cursed, or the paint... or something. I get to a point where I call it done, but then when it hangs around for some time, it jumps off the wall and gives me a head slap somewhat like the one the NCIS team (a TV show, not that I watch tv much)...uses to make a point.
The only thing left to do then, is burn it or paint over it. You don't want to give it away because if you don't like it, who else will? Well, someone will eventually.
Since I don't like to burn a good canvas and paint covers all, I choose to paint over.
This painting, appropriately titled "Chronicle" is the result of some re-working.
The new piece has a history of paint progression with at least three paint-over sessions. Each time, parts of the previous stages were spared in the process. It really took on a character of its own and seemed to push me in the direction it needed to go.
When you think something is going south, never give up. There might be a painting there somewhere waiting to happen!
Available at www.markyearwood.com
Posted by Mark Yearwood at 12:34 PM No comments:

Newer Posts Older Posts Home
Subscribe to: Posts (Atom)
All images © copyright 2014
by Mark Yearwood and may not be used without my consent.

Subscribe! (You must respond to verification email to activate)

Mark Yearwood
Weatherford, Oklahoma, United States
I am a Western Oklahoma artist painting abstract works in acrylic. Painting is a journey and I thrive on finding new things around each twist and turn of the path. I apply paint in many ways using various tools and an occasional brush or two. Texture fascinates me and I love to experiment. Paint is smeared on, scraped off, glazed over and generally abused until I'm satisfied with the results. I thank God for my ability to express myself on the canvas and for allowing me to touch others with that gift. View more of my works at www.markyearwood.com I welcome your emails and comments or questions about my work.

Promote Your Page Too